Actually, to one extent or another, just about all languages that I know much about can be considered ancestral to Tceqli, especially other artificial languages. Its most direct ancestor is, of course Loglan [link], and Tceqli actually started off as my attempt to reform and "humanize" Loglan. The best way to learn about Loglan is to clich here for Loglan 3. Thought I don't think anything I did made it into the language, I did some work on Loglan twenty-odd years back. The most worthwhile thing I did was graphic work, like the cartoon below.) In trying to reform Loglan, I did away with the (I thought) unhelpful  way they had of creating vocabulary by piecing together letters (or phonemes) from the eight largest languages, thus:
madzo,
mad maz mao <3/3C dzo;  2/3E made;  2/3G mach en

That is, the word madzo, meaning "make" is made up of 3/3 of the Mandarin dzo, 2/3 of English made, and 2/3 of German mach(en). And that's actually not so difficult for English speakers, as it does suggest "make" from its form. But a word like tcali,
cal <2/3E wall;  2/3G wall;  3/5C chiang Meaning "wall," is pretty opaque to speakers of all three source languages.

And also, look back up at madzo, and the entry right after it shows the three "combining" forms, which are to be used in compound words. I think this amounts to memorizing three more words.

Tceqi doesn't do any of this. It just "finds" vocabulary in other languages that fit its word-shape rule, nCnN — one or more consonants followed by one or more non-consonants. And that word is the word itself and also the only "combining form."

For example, the Loglan is:

gudmao - to improve. From gudbi plus madzo. "make good".  Gudbi has the combining forms gud and gub, while madzo of course has mad, maz, and mao.

But the Tceqli is bonkaw, from bon = good and kaw= cause. these words are both words and combining forms.

And the alphabet, as it stands, is almost exactly the same as the Loglan alphabet, at least in the form it had a few years back.

Another point I should make here is that Loglan can be pretty rigid, with no grammatical ambiguity allowed. Virtually every other language, natural and artificial, does allow ambiguity. And Tceqli has, or will have when everybody'd diddling with it, two basic forms or "registers," the "terse" or "ambiguous" form, and the "unambiguous" form, which usually requires more words. For example,

The first one could be read as to blufawl...
which would mean "the bluebird..."  The "sa" keeps the two words from forming a compound word. But in spoken Tceqli you can usually disinguish the difference, and in written Tceqli, the space between does the job.

Someday, a Loglan expert will help me make unambiguous Tceqli, well, unambiguous.
Posted by Baloo at 5:03 PM No comments: 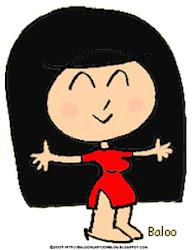